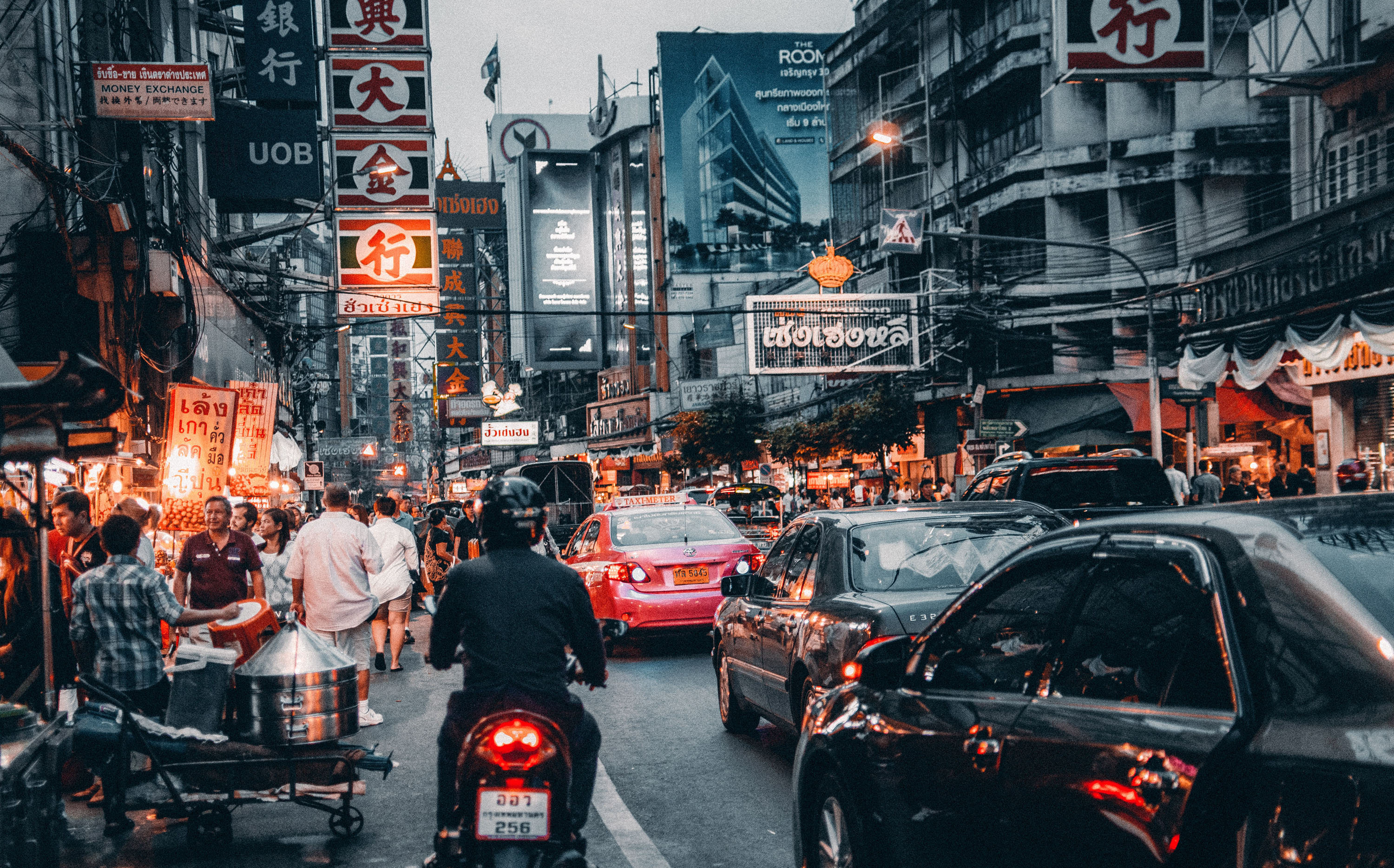 Between 2015 and 2016, despite having no interest in learning the Thai language, I spent 1 year in Bangkok with the sole purpose of attending 1200 hours of the Thai language course at the AUA language school. In this post I explain why.

What drew me to AUA was its method. At AUA there’s no books, no homework, no dictionaries, no taking notes, no translation, and no speaking practice. There are also no exams, no explicit grammar instruction, and no rigid syllabus.

Why I Went To AUA

I had had considerable experience learning foreign languages before (English, French and Japanese), and in 2013 I decided that I wanted to try to improve the world of language learning. The more languages I learned the more I realized how unnecessary the formal study of grammar and vocabulary is.

Finding AUA was eye-opening, especially after I read the book From the Outside In written by Marvin Brown, the creator of the ALG method used at AUA. The method matched my previous experience learning languages SO well. It was the closest thing I had found to learning a language like babies do. At AUA the only thing you do is listen. A LOT.

However, there is something new in the ALG method that hadn’t occurred to me before. ALG places a lot of importance on preventing “damage”. It argues that connections in your brain between your target language and the languages you already speak cause interference. Therefore, things like the following should be avoided: studying vocabulary through translation, forcing yourself to speak before you have acquired enough of the phonetics, grammar and vocabulary, or even reading too early. Doing these things would interfere with the representations of the phonetics, grammar and vocabulary that exist in your brain, and limit your potential final achievement. This would be the cause of interlanguage and eventually of the much feared fossilization.

Then many things started to make sense to me. I remembered mistakes that I keep making over and over in English even though I correct myself every single time I make them. I also noticed that my most common mistake speaking Japanese is when applying one rule that I studied during my first week of learning Japanese, before stopping learning rules completely. However, I was correctly using some much more difficult grammar that I had acquired naturally without ever considering it as “rules”. For me that was just the way you say it.

So the concept of “damage” of the ALG method matched my experience too. However, there was a possibility that I was cherry-picking from my memory the experiences that matched that theory, and not thinking about many other experiences that may have contradicted it. That possibly made me a victim of confirmation bias.

Existing research wasn’t that helpful either. It’s inherently quite difficult to do the kind of long-term studies that are necessary to measure language acquisition, while keeping a controlled environment for each of the experiment subjects to make sure that they learn using only a certain method.

Therefore I decided to go to AUA and try the method on myself. I wanted to compare it with the language learning experiences I had had before. While I had learned Japanese without studying the grammar, I had still used Japanese-English dictionaries and done quite a bit of reading from the beginning. I had also started to speak it relatively early. This time I wanted to experience how it felt to be able to understand a language without being aware of how it’s written, and also to experience the way the language sounded in my head without having any experience speaking it. I believe that a lot can be learned from what it “feels” like to be learning a foreign language. Many things that are difficult to measure, like the difference between a consciously learned word and an acquired word, feel very clearly different when you are aware of it and know what to look for. Also, I would be learning the language from zero and making sure to follow the method as closely as possible, making me a good experiment subject.

That’s how I decided to move to Bangkok for 1 year while hoping to be able to live off some money I had saved. I planned on attending the AUA Thai program every day on weekdays, while avoiding speaking Thai, and completely ignoring the written language.

The way the ALG method works from the point of view of the student is extremely simple to describe: just listen. The students are just supposed to sit down, and pay attention to what’s going on in the classroom. The teachers speak only Thai, and make their speech easy to understand by using props, gestures, drawing on the whiteboard, rephrasing things, etc.

There’s no explanation whatsoever of the grammar, and the vocabulary is also not explained. When meaning needs to be clarified, focus is towards clarifying the intended meaning in that particular situation rather than clarifying the meaning of a particular word. Teachers are supposed to only speak Thai and not translate things to English, neither speaking nor in writing.

Another way of putting it is that their use of the language tries to always be genuine communication. The teachers talk to you because they’re trying to convey meaning, be it telling you a story, teaching you about a subject, or just having a chat. The idea is not to use the language for the language’s sake. There’s no vocabulary testing games or any other kind of focus on memorization. The topic of the class may be chosen so that students feel the vocabulary they are exposed too is useful, but you never feel like the teachers have a hidden agenda and are trying to drill certain words.

The teachers try to make it as interesting as possible and discuss many topics: culture, daily life, personal stories, pop culture, and many more. Even though the students are only expected to listen, they’re actively participating in the class. The teachers ask for the students’ opinions and experiences all the time, but the students are allowed to reply in English, and actually encouraged to not try to speak Thai until it comes out naturally (in their experience this starts happening naturally after around 800h of listening for western people learning Thai). This matches well the silent period observed in children learning their first or second language. The ALG theory itself states that forcing yourself to speak a language before you’ve acquired the proper mental structures makes you end up with a worse mental image that’s more affected by your native language and your assumptions and misconceptions.

Students are not supposed to write down things, pay attention to the grammar, or try holding onto words. As I mentioned before, there’s no homework or exams either. Words are acquired from context, and grammar is acquired also from context once the words used in particular sentences start becoming clearer. Later in this series of posts I will explain how I experienced this progress.

The Thai alphabet is also not taught in the main fluency course. Teachers do sometimes write down some of the more abstract words (eg. “Democracy”) to be able to point back to them on the whiteboard, but reading and writing is not really encouraged until reaching a certain level in the language. You can read the post The Tyranny of the Written Word to know why I think this is a good idea. There is a separate reading and writing class, but I didn’t attend it, so I won’t discuss it.

The way classes are structured at AUA is a bit different from other schools. There are no courses per se. When I was there classes went on from 9:00 AM to 7:00 PM from Monday to Thursday, until 5:00 PM on Friday and until 4:00 PM on Saturday. Instead of signing up for a course of a certain duration, you buy a pack of hours that you can then go and spend whenever you want. You can buy as few or as many hours as you want, with hour packs becoming cheaper if you buy 30, 100 and 200 hours. Hour packs have an expiration date to encourage you to attend the school frequently. Additionally, there’s a free hour bonus you can get by attending a certain amount of classes in a short time.

Classes start at the beginning of each hour, and last 50 minutes, so you have a 10-minute break in between classes. You can attend a single hour, or you can attend all 10 hours in a single day if you feel like it. A certain teacher always teaches at the same time slot, so if there are certain teachers that you like more than others, you can attend those classes. You’re given 1 free hour when you first register at the school, and then you can decide if you want to buy hours.

The policy they had when I attended is that to progress from one level to the next one you could take a single free hour in the level above your current one and then decide if you wanted to go to the next level or wait for a while. There’s no test or exam. However, when students that sign up claim to have a certain level of Thai, the person in duty at the office will have a short conversation in Thai to decide what level they should be put in.

This post is getting quite lengthy, so I’ll stop writing here.

There are 2 more posts coming in the following weeks, in which I will talk about my personal experience in the classes, about the specific activities that the teachers do, about the differences between the 3 levels, and about my progress and achievement. I will also write some conclusions and mention some things that I believe could be improved.